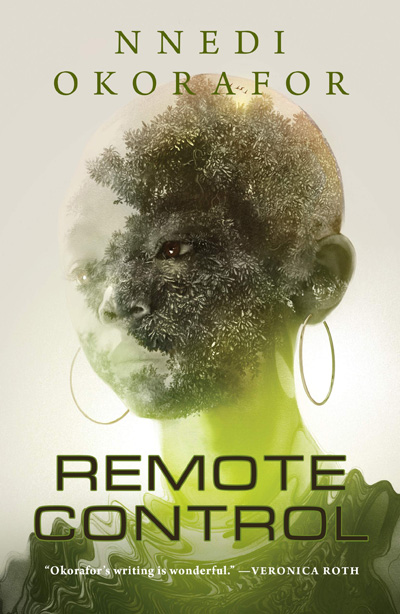 Remote Control is science fiction of the Africanfuturist strain that knows aliens exist, quietly shows how technology is influenced by culture, features a powerful yet deeply-pained female protagonist, and wonders about the role of corporations in rural Africa.

In the shea tree farms of Wulugu, not the big city of Accra. In Remote Control, there are jelli-tellis, tvs made of gelatin that could be stretched and stuck to walls. Prayer Shacks, large walk-in containers with oriental rugs on their floors that block out all wireless networks so that one can truly be alone to pray. Traffic robots controlling intersections that are well-maintained and loved by its villagers. Mobile phones called “windows” that are thin as a card of glass. It’s a familiar world that’s a few steps into the future. And it is African. Ghanaian, to be very specific.

This novella puts us right on the road, walking with a Ghanaian girl who quickly understands her entitlement. You can look around, smell the palm trees and dust, and like Guillermo del Toro’s cinematic masterpiece Pan’s Labyrinth, Remote Control dances above the lines between young adult and adult without a care.

Remote Control will sink into your skin like the purest shea butter.

Read an except here

“Riveting from its opening page… lyrical and compelling.”

“Once again the incomparable Nnedi Okorafor has written a thought-provoking and visionary tale of fantastic Black girl empowerment futurism.”

“Episodic and organic, the story winds along with a limber rhythm that allows every rich detail of Sankofa’s surreal world to surface. It’s a cumulative narrative, a slow burn that builds in emotional urgency even as the scope of Okorafor’s worldbuilding bursts into something breathtakingly vast.”

“Thrilling and surprising all the way through.”

“[Okorafor] has a rare ability to open the reader’s mind to various futures while creating complex characters and communities… A captivating world, a tragic tale, and a dangerous future.”

“I loved so many things about Okorafor’s book. The futuristic details have wit, energy and brilliance, but there is also genuine depth to the narrative: a serene, folktale-ish cadence that feels timeless.”

“As the winner of Nebula and Hugo awards, Okorafor has been embraced by the field, and in Remote Control she takes the acclaim and uses it ― in an assured manner ― to radically undermine the stories that the world tells to manifest its power.”

“A beautiful, sad, enthralling novella set in a futuristic Africa, Remote Control is a refreshing oasis of creativity… I implore you to discover this lovely, captivating story for yourself.”

“Okorafor builds a stunning landscape of futuristic technology and African culture, with prose that will grab readers from the first sentence.”

“This imaginative, thought-provoking story uses elements of the fantastic to investigate the complexities of gender and community outside of a European, colonial imagination. Readers will be blown away.”

“Full of emotional depth and resonance, this is beautiful.”